THE THREE FATAL FLAWS OF EQUITY 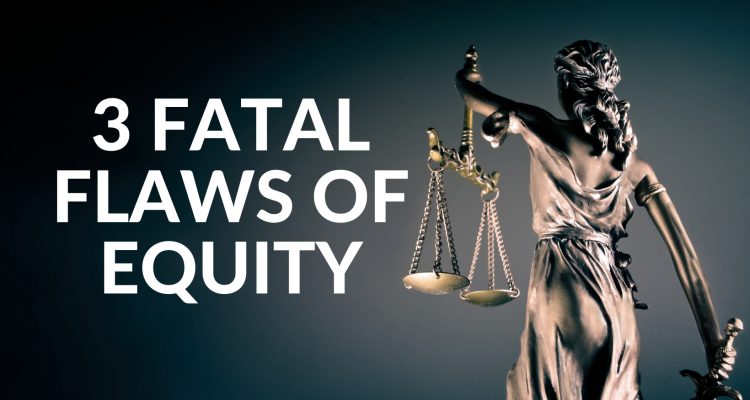 THE THREE FATAL FLAWS OF EQUITY

All this talk about more equity in our institutions seems like a good thing, right?

There are undoubtedly those within the debate over diversity, inclusivity, and equity who genuinely try to reduce discrimination and attempt to unite people of different backgrounds. That’s a good thing. But let’s not be fooled into believing that we must embrace the Left’s dangerous views of equity hook line and sinker.

To prevent you from believing the secular lies of equity, I’ve put together three areas that expose the faulty thinking and the dangerous results that come with this unchecked justice referred to as “equitable treatment.”

The Unequal Treatments of Equity

Equality, as we’ve known it to mean, is treating everyone the same. But that’s no longer the case. Instead, the Left has hijacked equality by socially engineering it into something predicated on equal outcomes (i.e., equity), not based on equal opportunity.

The Austrian-British economist, Friedrich Hayek (1899-1992), distinctively communicated the difference between equality and equity by writing, “There is all the difference in the world between treating people equally and attempting to make them equal. While the first is the condition of a free society, the second means, as De Tocqueville described it, a new form of servitude.”

The idea of a “new form of servitude” is to mistreat the fortunate to treat the less fortunate fairly. But how is that just and fair? If equity is about the “systematic fair, just, and impartial treatment of all individuals,” how is the unequal distribution of benefits to low-income individuals considered equitable? This equitable posture is the classic “fair share” philosophy that has its roots in socialism.

Just because inequities exist doesn’t give the government or some social justice system the right to step in and attempt to level the playing field so that everyone ends up in the same place. That, my friends, is not equality, nor is it following the impartial mandates of the law.

The Injustice of Equity

In his book, Prosperity and Poverty, Calvin Beisner proves this point, “The only way to arrive at equal fruits is to equalize behavior, and that requires robbing men of liberty, making them slaves.”

The truth is equity (according to the Left) doesn’t promote fairness, equal opportunities, or equal outcomes. As a matter of fact, it snubs individuality, stifles creativity, cheapens competition, steals from hard earning workers, lowers the standards of achievement, and actually advances partiality—and often, promotes racism.

On his blog, Neal Hardin writes, “In order for total uniformity of results to be achieved, there would have to be a uniformity of our characteristics and desires. In other words, true equality of outcome could only result if there were no meaningful differences among human beings or the choices we would make, which seems to go completely contrary to the diversity which God intended in creation. Clearly, on some level, God created us with these diverse characteristics and desires expecting different outcomes.”

To ignore each person’s uniqueness, giftedness and not to embrace diversity is in itself an injustice that (if left unchecked) leads to more discrimination and oppression.

The Inconsistencies of Equity

“Black Lives Matter stands in solidarity with Palestinians,” the protest group declared in a tweet. The tweet went on to say, “We are a movement committed to ending settler colonialism in all forms and will continue to advocate for Palestinian liberation (always have. And always will be).”

But here’s the thing. If BLM is for equity, then why don’t they stand with Israel?

What about Mayor Lightfoot of Chicago? In the spirit of equity, she, a black woman, only gave interviews to black and brown journalists in celebration of her two years in office. Say what? How is that being fair while discriminating against white journalists? Not to mention is that honest journalism?

Here’s the bottom line. No one denies there are disparities among people. We come from different backgrounds, ethnic groups, families, etc. But just because we are created equal doesn’t mean we are all created the same. We are not all the same. And it is feasibly impossible to make everyone end up at the same place.

Individual freedom doesn’t guarantee equal outcomes. It does, however, provide equal opportunity for people to succeed in life. Our nation was founded on the solid conviction that equality of humanity retains and sustains the essence of human rights in a civil society. That’s the kind of equity Christians should support and defend.

However, when the culture measures human rights based on color, ethnicity, and socioeconomic status, that culture will not survive. The more America moves further away from God and his truth, the deeper our nation will slip into spiritual corruption and generate more inequalities and inequities within society.

As Christians, we are to honor the fact that each human is made in the image of God. We need to remember that God has made each of us diverse in color, ethnicity, and personality and learn to appreciate the uniqueness and difference in each of us.

Jason Jimenez is president of STAND STRONG Ministries, a faculty member at Summit Ministries, and the author of Challenging Conversations: A Practical Guide to Discuss Controversial Topics in the Church.